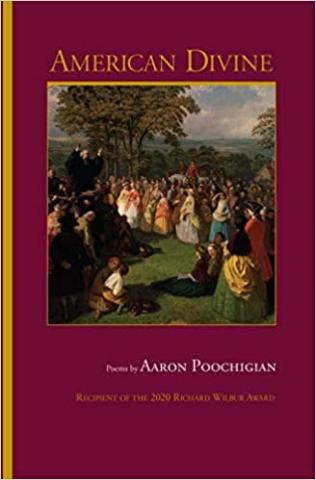 
Recipient of the 2020 Richard Wilbur Award

Full-length collection of original poetry from Aaron Poochigian, now available for order from Amazon, Barnes and Noble, Foyles, and other online and offline bookstores worldwide.

If any doubts remain that a splendidly original poet has arrived, American Divine should settle the matter. The book confirms Poochigian's status as one of the most arresting poets of his generation. The poems are strong, individual, and unusually accessible despite their capacious erudition. The real critical question is more complicated, namely how does one describe the singular poet Poochigian has become? How does one characterize the potent and omnivorous style he has created? Poochigian is at once a traditional, indeed even classical, and yet his work is idiosyncratic, disruptive, and often disturbing -- not the qualities usually associated with a classical sensibility. --Dana Gioia

Many poets now write in rhyme and meter, but few use the techniques well. Poochigian's verse technique is formidable, and he has the good sense to employ it with a minimum of bravado. In a real and direct sense, he is an heir to New Formalism, which revived formal metrics without the academic paraphernalia of the postwar professoriate. He studied with David Mason and Timothy Murphy, two significant figures in the revival, and attended the West Chester conferences on form and narrative. Having learned from his elders, however, Poochigian has declined to be their epigone. He has also avoided the general risk posed by traditional forms -- sounding generic. He has done what the tradition perpetually demands; he has created his own sound above the steady beat of the old meters -- fast --paced, eclectic, and decisive. --Dana Gioia

Aaron Poochigian's American Divine displays the sweeping vision of a Walt Whitman, the knack for narrative of a Robert Frost, and the genius for prosody of a James Merrill. --Mike Juster

Aaron Poochigian writes like leashed lightning. His passion and speed, his ferocity and heartbreak, are the lightning; his infallible sense of form, tempered by wit, is the leash. As the lightning sizzles and strikes, the leash (block that metaphor!) strains but holds taut, perhaps especially in his wonderful sonnets. American Divine encompasses anthropology, urban pastoral, road trip saga, lover's lament, and more. But as this book slides between modes, it never stops singing, because American Divine is above all a stunningly sustained collection of poems. --Rachel Hadas

AARON POOCHIGIAN earned a PhD in Classics from the University of Minnesota and an MFA in Poetry from Columbia University. His thriller in verse, Mr. Either/Or, was released by Etruscan Press in the fall of 2017. A recipient of an NEA Grant in translation, he has published translations with Penguin Classics and W. W. Norton. His latest book American Divine, the winner of the Richard Wilbur Award, came out in 2021. His other poetry collections are Manhattanite (Able Muse Press, 2017), winner of the 2016 Able Muse Book Award, and The Cosmic Purr (Able Muse Press, 2012). His work has appeared in such publications as Best American Poetry, the Paris Review and POETRY.

Signup for book & other news!