The Flowers of Evil 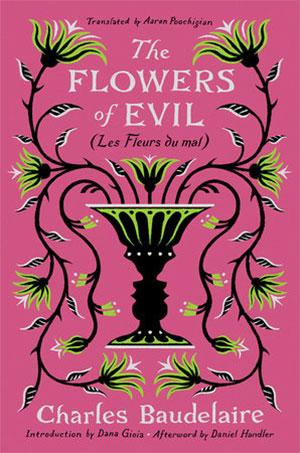 Translation of Charles Baudelaire's The Flowers of Evil (Les Fleurs du Mal) by Aaron Poochigian, with an Introduction by Dana Gioia and an Afterword by Daniel Handler, now available for order from Liveright, Amazon, Barnes and Noble, Foyles, and other online and offline bookstores worldwide.

Translated from the French by Aaron Poochigian
With an Introduction by Dana Gioia and an Afterword by Daniel Handler
Hardcover ~ $27.95

On the 200th anniversary of Baudelaire’s birth comes this stunning landmark translation of the book that launched modern poetry.

A shocking, controversial work in its own time and the most influential book of poetry of the nineteenth century—“the greatest exemplar in modern poetry in any language” (T.S. Eliot)—Charles Baudelaire’s The Flowers of Evil is a gritty, often perverse, exploration of the underbelly of urban modernity.

Acclaimed translator and poet Aaron Poochigian tackles this revolutionary text, one of the most challenging to translate in all of modern poetry, with an ear exquisitely attuned to Baudelaire’s lyrical innovations and an intuitive feel for the work’s dark and brooding mood. Poochigian’s version captures the incantatory, almost magical, effect of the original—reanimating for today’s reader Baudelaire’s “unfailing vision” that “trumpeted the space and light of the future” (Patti Smith).

An introduction by Dana Gioia offers a probing reassessment of the supreme artistry of Baudelaire’s masterpiece, and an afterword by Daniel Handler explores its continued relevance and appeal. This deluxe, dual-language edition allows readers to commune with the original poems and their electric, revelatory translations.

Charles Baudelaire (1821 – 1897) holds the most wide-ranging influence of the French Symbolist poets. A respected reviewer and critic whose translations of Edgar Allan Poe were much admired in his time, he died young, at only forty-six, but left behind a legacy of work at the center of which stands his masterpiece, the poems of Les Fleurs du mal, first published in 1857 to shock and acclaim. (Victor Hugo was an admirer, as were Rimbaud, Verlaine, and others.) Baudelaire’s prosodic confidence, deft use of rhyme, and absolute control of tone provide a striking contrast with the tumultuous emotional life that his poems record. Particularly impressive are his imaginative range and insight into the human psyche as he observed it in the urban life of Paris.

Aaron Poochigian earned a PhD in Classics from the University of Minnesota and an MFA in Poetry from Columbia University. His thriller in verse, Mr. Either/Or, was released by Etruscan Press in the fall of 2017. A recipient of an NEA Grant in translation, he has published translations with Penguin Classics and W. W. Norton. His latest book American Divine, the winner of the Richard Wilbur Award, came out in 2021. His other poetry collections are Manhattanite (Able Muse Press, 2017), winner of the 2016 Able Muse Book Award, and The Cosmic Purr (Able Muse Press, 2012). His work has appeared in such publications as Best American Poetry, the Paris Review and POETRY.

Signup for book & other news!