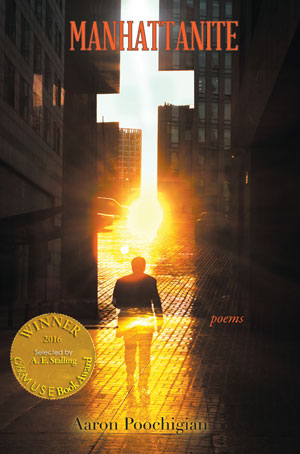 — Poems by Aaron Poochigian
(with a Foreword by A. E. Stallings)

Manhattanite
— Poems by Aaron Poochigian
With a Foreword by A. E. Stallings
Paperback ~ $18.95

Aaron Poochigian’s prizewinning second collection of poetry, Manhattanite, is by turns frenzied and focused. It examines New York’s juxtaposed symbols of towering achievement and monumental desolation, and then traverses the country to California’s Central Valley, where the poet reclaims his grandparents’ home. Poochigian consistently entertains, whether his theme is lamentation or celebration—a grizzled urban pigeon (scavenging for “the sort of faith/ that holds for here and now and vibes like song”) or an Ohio wind turbine (an “ungatherable/ iron flower” seen “juggling . . . / three arms’ worth/ of gale-force wind”). Manhattanite is, deservedly, the winner of the 2016 Able Muse Book Award.

Like the shuttered diner that used to serve “Americana-for-the-budget-patron,” Manhattanite gives us the Manhattan of speed chess players in the park, tipsy tipplers tipping off the rooftops, the night sky bright with city light, tenants, tenements and supers. Aaron Poochigian is the poet in New York seeking a holy aura in the song of gunshots and spiral sirens, picking like a grizzled pigeon through stray newspapers, bottles, bags, and candy wrappers for a scrap of religion. Each poem is a tower growing out of our human filth and scraping the sky with sky-lines, and together they build a city of words. Put New York in your pocket. It’s inside this book.
—Tony Barnstone, author of Pulp Sonnets

Reading Aaron Poochigian’s Manhattanite is a dynamic, kinetic experience. These poems travel at a fast clip, pulling you along through cityscapes, wastelands, and other vistas. Some of the poems tunnel downward, plumbing depths of mood and memory. Whichever way they move, Poochigian’s poems perform with such panache and brio that it’s hard to know whether to laugh or cry. I’d say do both—and keep reading.  But be warned: this isn’t a feel-good book. It’s a fearless book.
—Rachel Hadas, author of The River of Forgetfulness

Thoreau once boasted that he had traveled widely in Concord; Aaron Poochigian’s title indicates that he has traveled widely elsewhere—in the one borough worth experiencing, through western deserts, aboard “an ultra-modern train/ lisping through French or German woods,” and in a Paris of naked bulbs and seedy cabarets. In all of these settings, he deftly choreographs his cast of nameless characters. The concluding lines of “Song: Go and Do It” (channeling both John Donne and The Intruders) claim, “I’ll still swear/ we could be happy anywhere.” One sure location of that “anywhere” exists between the covers of Manhattanite.
—R. S. Gwynn, author of Dogwatch

Aaron Poochigian earned a PhD in Classics from the University of Minnesota in 2006 and an MFA in Poetry from Columbia University in 2016. His book of translations from Sappho, Stung With Love, was published by Penguin Classics in 2009, and his translation of Apollonius’s Jason and the Argonauts was released October 2014. For his work in translation he was awarded a 2010–2011 Grant by the National Endowment for the Arts. His first book of original poetry, The Cosmic Purr (Able Muse Press) was published in 2012, and several of the poems in it collectively won the New England Poetry Club’s Daniel Varoujan Prize. His work has appeared in The Guardian, Poems Out Loud, and Poetry.
Manhattanite is the winner of the 2016 Able Muse Book Award.